Here we are, yet another year away from the fall of Sauron and the destruction of the One Ring, on Tolkien Reading Day 2021. The Tolkien society have set the theme of Hope and Courage for us to dig into in some depth, and there is certainly an abundance of both qualities throughout the legendarium, and especially in the Lord of the Rings.

One of the greatest arcs throughout Tolkien’s entire legendarium is that of Samwise Gamgee. From humble gardener, to Samwise the Brave, Orc-slayer, ringbearer and Mayor of the Shire. Sam is also the character that popped into my mind when I saw the theme for this year’s Tolkien Reading Day, and a particular point in the journey that I have been chipping away at in preparation for an upcoming addition to my collection of Lord of the Rings art.

So in the good old fashioned since of killing two birds with one ring, this Tolkien Reading Day has covered a lot of ground for the research needed for my upcoming artwork depicting Sam and Frodo in Mordor.

END_OF_DOCUMENT_TOKEN_TO_BE_REPLACED 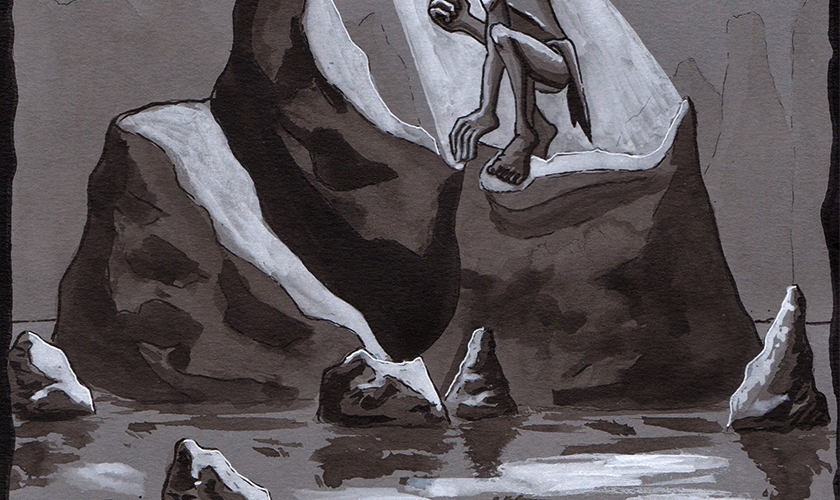 Middle-earth has been calling yet again and never one to ignore the call of adventure, I decided to explore. My journey took me deep into the passages of The Hobbit and far under the Misty Mountains to the dark depths of the caves and subterranean lakes of forgotten times.

Let’s see what JRR Tolkien himself had to say about the place:

END_OF_DOCUMENT_TOKEN_TO_BE_REPLACED 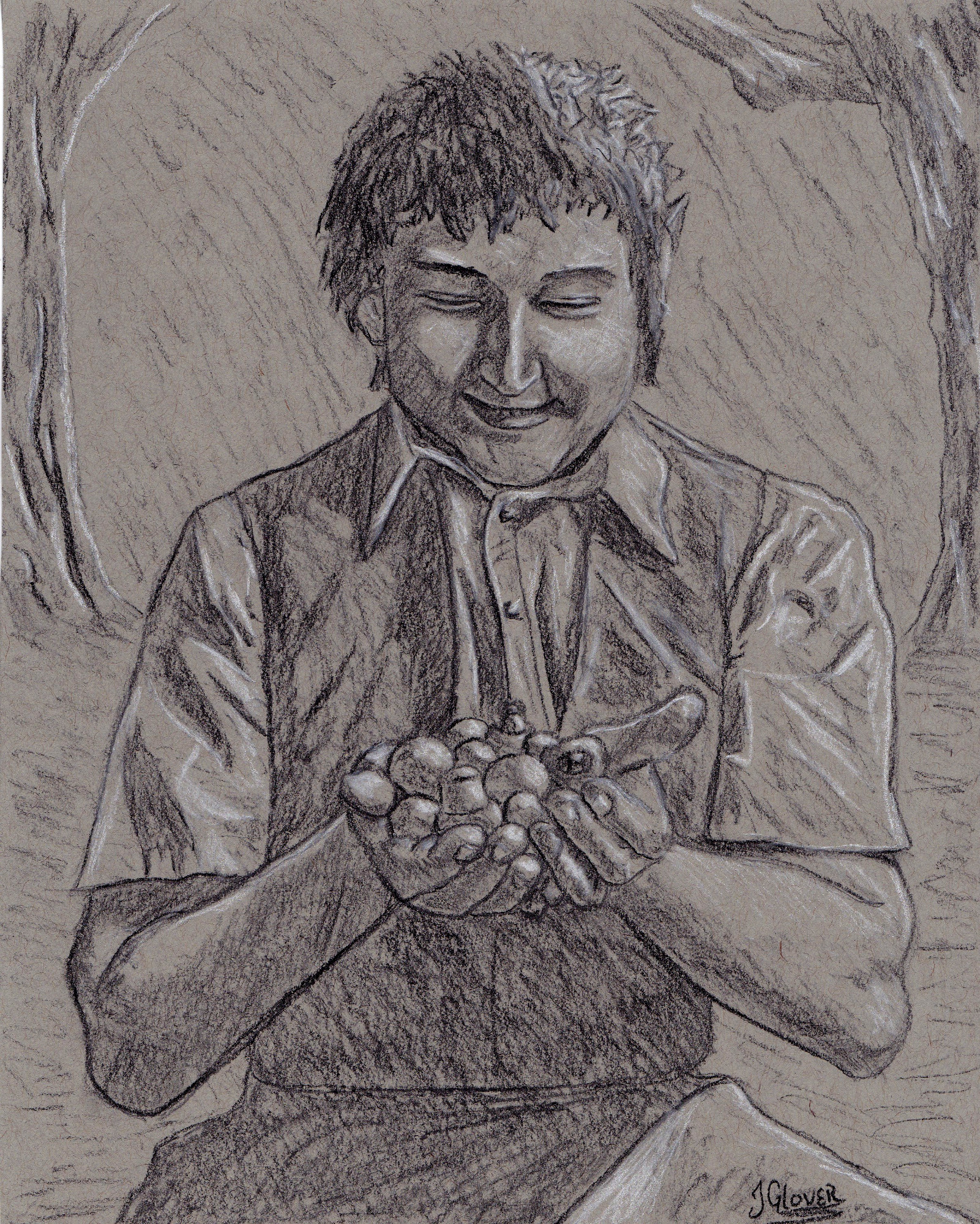 A Shortcut to Mushrooms – Charcoal

‘Hobbits have a passion for mushrooms, surpassing even the greediest likings of Big People’

The Lord of the Rings – The Fellowship of the Ring, Book I, Chapter V – A Conspiracy Unmasked

I recently did something that has been quite a long held ambition of mine; I depicted myself as a Hobbit. This was quite an off the cuff project, planned, sketched and completed within a few hours for a competition that I entered.

END_OF_DOCUMENT_TOKEN_TO_BE_REPLACED

Ringwraiths, or Nazgul are the horror element to Tolkien’s Lord of the Rings story, and the scariest they ever get is quite possibly in Chapter 11 of The Fellowship of the Ring – A Knife in the Dark. With this oil painting, I wanted to capture the fear they induce and put into those who face them.

“The Ringwraiths are deadly enemies, but they are only shadows yet of the power and terror they would possess if the Ruling Ring was on their master’s hand again”

JRR Tolkien – The Lord of the Rings – The Fellowship of the Ring – Book I, Chapter 4 – A Journey in the Dark

A lot of what we learn about the Ringwraiths we learn fairly early on, Tolkien gives us a nice amount of detail through the words of Gandalf the Grey, as he explains to Frodo:

END_OF_DOCUMENT_TOKEN_TO_BE_REPLACED

As usual, it all started with a sketch…

For a very long time now, since my last re-read of The Hobbit, I have been wanting to explore in depth the character of Bilbo Baggins; of all of Tolkien’s characters Bilbo is the one that I feel akin to and relate to the most.

Before I had made the second mark on paper, I knew that I wanted the final piece to be an ink drawing; ink is a medium that I absolutely love but don’t get to work with enough and thus my experience with the medium is somewhat lacking.

However, knowing that the final piece would be inked, informed my sketching process in a different way than usual and thus made me adapt to a different way of drawing to my usual charcoal and blend method.

END_OF_DOCUMENT_TOKEN_TO_BE_REPLACED

“This is where we leave the open and take to cover,” said Strider.

Here we are, returning again to Hobbits, and a marsh, and a plan for a future oil painting with a heavy focus on the landscape this time around. My last painting of a similar scene was ‘The Passage of the Marshes’ but I intend to take this one in a different direction.

This new piece is inspired by The Lord of the Rings – The Fellowship of the Ring, Book One, Chapter XI – A Knife In The Dark. In this scene we join the four Hobbits; Frodo, Sam, Merry and Pippin as they follow Strider to Rivendell, before that though is the journey to Amon Sûl (Weathertop) which takes them through the Midgewater Marshes.

END_OF_DOCUMENT_TOKEN_TO_BE_REPLACED

“Good Morning!” said Bilbo, and he meant it. The sun was shining, and the grass was very green. But Gandalf looked at him from under long bushy eyebrows that stuck out further than the brim of his shady hat.
“What do you mean?” he said. “Do you wish me a good morning, or mean that it is a good morning whether I want it or not; or that you feel good this morning; or that it is a morning to be good on?”

– J.R.R. Tolkien; The Hobbit; or There and Back Again

I pulled out my sketchbook and blew the dust off it as though it was an ancient tome that I had recovered from the depths of a barrow and before the the tiredness overtook me, I started sketching.

The Breaking of the Fellowship…

Here we are at the final chapter of the Fellowship of the Ring, Book Two; just over two months since the Fellowship set out from Rivendell on their quest to destroy the ring and things take yet another turn for the worse.

Gandalf fell into the abyss whilst fighting the (wingless) Balrog and has been lost to the depths of Moria, still grieving, the rest of the guys have just had to up and leave the relative safety and comfort of Lothlorien after almost a month of being there.

So at this stage in the story, Frodo has done one of his famous ‘disappearing acts’ in order to give Boromir the slips but in the process given everyone else in the Fellowship a bad case of anxiety as to his whereabouts.

END_OF_DOCUMENT_TOKEN_TO_BE_REPLACED

It was after nightfall when they had entered the Mines. They had been going for several hours with only brief halts, when Gandalf came to his first serious check.

JRR Tolkien – The Lord of the Rings – The Fellowship of the Ring – Book II, Chapter 4 – A Journey in the Dark

The question of why Gandalf doesn’t remember Moria is one that comes up a lot and there is a ton of digging that you can do in order to find out but in short, it had been a very, very long time since Gandalf’s last trip to Moria, and also he had entered through a different, and not so secret doorway. Not forgetting that it wouldn’t have been as dark, filled with orcs and trolls not was he transporting the carrier of the One Ring wit the fate of Middle-earth hanging in the balance.

So that’s the short answer to the question, I will in the future dig into this in much more depth. I would like to create a series of artworks depicting both of Gandalf’s trips through Moria as well as the many battles that have happened there.

Many years ago I worked up a very rough sketch of a version of this scene and ever since I intended to work up a more detailed drawing. This piece is the next phase of that and I plan on revisiting it again in much more detail and originality of vision, as noted above.

Every exploration of Middle-earth brings a bounty of new art and my own journeys into the depths of the Mines have been both interesting and perilous, full of inspiration and excitement with many lessons learned in the process.

For this illustration, we head to The Lord of the Rings – The Fellowship of the Ring, Book Two, Chapter IV – A Journey In The Dark.

END_OF_DOCUMENT_TOKEN_TO_BE_REPLACED 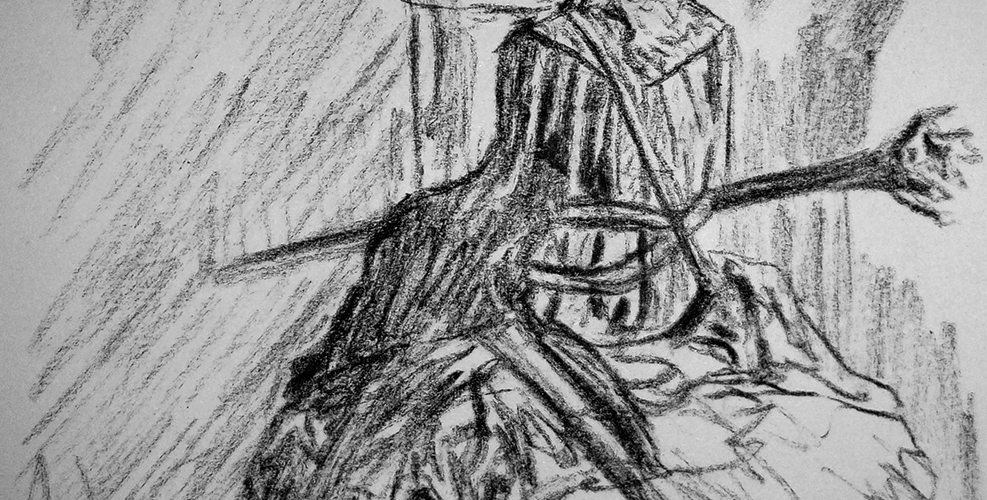 ‘I have no memory of this place…’

Over three years ago now I sketched out the piece below with a sanguine pastel and I recently decided that I would like to revisit the scene as it is a favourite of mine.

The journey through the Mines of Moria is a truly pivotal moment for the Fellowship especially with the fall of Gandalf less than a month after they all set out from Rivendell. 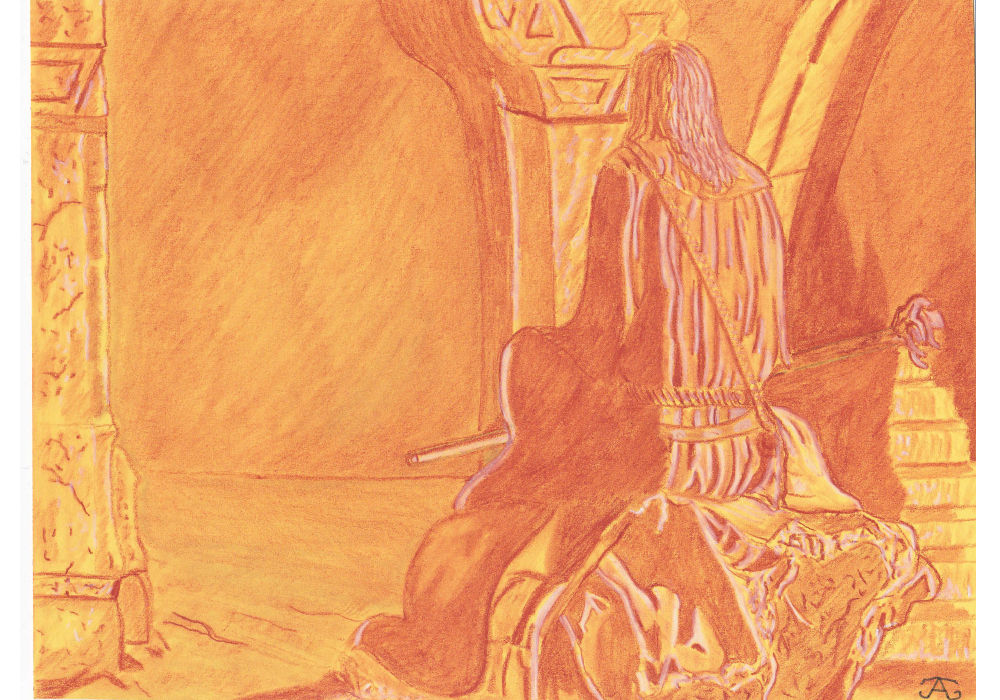